There are so many capable men... and all they can think to do is rob a convenience store? Kinda weird... you'd think a group this big might just, y'know... have bigger goals than that... You're all sick. And you need a cure.
Kai Chisaki to Team Reservoir Dogs in "Unleashed"

This article is about the character. For this character's Quirk, see Overhaul.

Kai is a pale man of narrow build with short, shaggy auburn hair, parted to the left. His eyes are thin, their irises small and gold, with rather long lower eyelashes and small eyebrows. He also possesses a small scar on the left side of his forehead that he acquired as a result of his fight with the League of Villains. He has three piercings in his left ear. He usually has his mouth covered by a plague doctor mask, following his battle with Izuku Midoriya, however, his mask is removed and his mouth is consequently uncovered, and he also loses both of his arms to Mr. Compress and Tomura Shigaraki.

He wears a black dress shirt with matching dress pants, a pale gray tie around his neck and a belt with a long, thin buckle around his waist, with three beaded lobe piercings in his left ear. Over this, he wears a dark olive-green bomber jacket, its collar lined with thick purple fur, and white lace-up sneakers, their soles tan-colored, with no socks on his feet. His most noticeable features are the white surgical gloves he wears on his hands and the magenta plague mask he wears over his mouth, which is tipped and embroidered with gold. 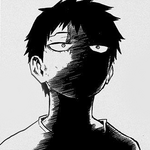 Kai as a child.

Kai before becoming a villain. 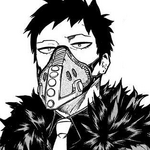 Overhaul in the manga.

After fusing with Shin Nemoto, Overhaul gets an additional two arms deformed with spiked claws and black parts of Shin's cape. His hair gets spikier, and his mask rips apart, seeming to be fused onto his face, which is also covered in black fabric. Shin is presumably conscious in the fused form as his mouth is used through Overhaul's right hand and his Quirk is in use.[4]

After fusing with Rikiya Katsukame, Overhaul's lower body is fused into a monstrous stone structure, protruding multiple appendages each equipped with clawed hands. Overhaul's upper body is the same but lies within the mouth of the structure, and his upper jaw has Rikiya's mask.[5]

Overhaul is a mysophobic, antisocial sociopath obsessed with returning the world to the way it was before the Quirk phenomenon. Due to a combination of an old theory claiming Quirks derived from rats and his own mysophobia, Overhaul believes that Quirks are actually a plague on humanity. He believes the Quirk epidemic has changed the world and infected society with "Hero Syndrome", and he is extremely determined to eradicate Quirks from the world in order to return it to its former state with the Yakuza in power.

Overhaul is very germophobic and hates anything he feels is dirty; he likes to avoid dirty places and hates when people dirty him or the area around him. He’ll even break out into hives when covered in dirt or blood, and as he views Quirks as a sickness, he also treats them as he would any other kind of filth.

Overhaul feels as if he owes a debt to the Boss and the Yakuza for taking him in, even from a young age, he was dead set on returning that debt no matter the cost. The Boss would try to sway Kai to a more honorable path to no avail, as he would frequently get into violent fights and eventually involved himself in illegal dealings.

He grew up and became a villain determined to reinstate the Yakuza even if it meant taking advantage and abusing others; he has no remorse for those he uses or kills for his ambitions, and he sees everyone as expendable pawns for his ultimate goal. In order to achieve his ambitions, Overhaul went as far to force the Boss into a comatose state to use his granddaughter Eri to create Quirk-Destroying Bullets.

Overhaul has no moral compass and an enormous ego, viewing himself as the only person in the world that's enlightened to the Quirk epidemic. He believes that he is always right and all others are wrong to oppose his conquest, also believing that he should be the one to inherit All For One's place as the king of evil rather than Tomura.

Overhaul doesn’t value humans and views people as pawns for their utilitarian value, and he carries this sentiment even towards the people in his organization he’s known since childhood; he treats them all as dispensable. He considers everybody, even childhood friends and his closest right-hand man, expendable and his subordinates are made to wear masks like him so that he doesn't have to breathe the same air as them.

The only person Overhaul has ever shown concern for is the Boss who raised him, but, despite his feelings for the Boss, Overhaul incapacitated him to achieve his goals, because he was against Overhaul's methods. He abused the Boss's young granddaughter without remorse to create a drug that could destroy Quirks.

As a leader of his organization, Overhaul is levelheaded and possesses a strategic mindset, and, according to a conversation with Twice, he seems to be nice at first. Whether he is acting or behaving genuinely, Overhaul does possess polite mannerisms and can come off as very calm and classy, this being evident in his first meeting with Mirio Togata and Izuku. He will speak to others in a very composed manner and display very good social skills in the required situation, but when he’s aggravated, Overhaul shows his killer instincts and lashes out violently.

Overhaul's failure to recognize others, and his own obstinate nature, brings about his end. Despite his strong-willed attitude, he is capable of expressing true fear and shock; as he was horrified when the League of Villains took his Quirk destroying drug, destroyed his arms, and taunted him for his situation. His facial expression was that of fear, as he was now helpless and powerless, ironically the very thing he had wanted to inflict onto others.[6]

Overall Abilities: Overhaul is an incredibly powerful villain that garnered the attention of All For One, the most powerful villain in Japan. He is very intelligent and extremely dangerous due to his Quirk and lack of remorse. This allowed him to overpower: Kendo Rappa; one of his Eight Expendables, Sir Nighteye; All Might's former sidekick, and Izuku; an inheritor of One For All. Overhaul was even capable of holding his own against Mirio, a U.A. student worthy of the No. 1 Hero spot.

During his battle with the Heroes that were part of the Shie Hassaikai Raid, Overhaul was so adamant on not letting his plans get ruined, he went as far as to fuse with Shin, and then Rikiya, displaying, not only a monstrous appearance, but a drastic increase in power. It took Izuku utilizing One For All: Full Cowl - 100%, thanks to Eri, to finally overwhelm and defeat the amalgamated Yakuza leader.

Overhaul (オーバーホール, Ōbāhōru?): Kai’s Quirk grants him the ability to disassemble and reassemble anything he touches, effectively giving him full control over matter. He can disassemble people to kill them or reassemble them to heal their wounds. He can also do this to himself and even merge his body with others; even allowing him to use their Quirks, such as Shin's Confession and Rikiya's Vitality Stealing.

In battle, Kai can freely manipulate his surroundings. He can move the ground to maneuver himself to reshape the area into some advantageous for him and harmful for his opponents. By touching his targets, he can completely blow their body apart, whether it be a limb, or the entirety of it. After Mr. Compress and Tomura destroyed his arms, which are also his Quirk Factor, Kai is now unable to use his Quirk.

Retrieved from "https://my-hero-academia.fandom.com/wiki/Kai_Chisaki?oldid=206347"
*Disclosure: Some of the links above are affiliate links, meaning, at no additional cost to you, Fandom will earn a commission if you click through and make a purchase. Community content is available under CC-BY-SA unless otherwise noted.
FandomShop Fandom IG GalaxyQuest